Marcos is from a strong footballing family with his dad and granddad both playing professional football at a high level. In his early years he started playing for Alcobendas which is a small team in the region that Marcos grew up. After one year Marcos started to play for A.D. Adarve who are a feeder club for Real Madrid. Marcos started to shine at Adarve under the guidance of José ‘Pepe’ Fernández, who has been a big influence in Marcos’ career.

After this year Alonso trialled at Real Madrid but didn’t complete the trial due to a family holiday. After two weeks his father received a call in Marbella saying that Madrid wanted him to start pre-season with them.

Marcos followed in the footsteps of his grandfather having been born in Madrid, he joined Real Madrid’s youth academy progressing through every year to represent the side at every youth level. 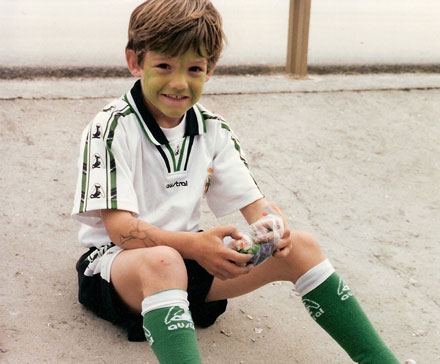 The first years at Real Madrid were hard for Marcos because the Spaniard was playing at an older age group. Marcos put his head down and worked hard to earn his place and Juan Vicente Peinado put his faith in Marcos. At the age of 17 years old he had his first training session with the first team. A fantastic talent, the Spanish full-back reached Real Madrid Castilla in 2008, making his first appearance for the side on 22nd February 2009.

In the next year, at the age of 18, Marcos started to play with the second team of Real Madrid. He was also used to train with the first team under Bernd Schuster.

In his second year with Castilla Marcos started to play at a high level and Manuel Pellegrini realised he could count on Marcos.

Coach Manuel Pellegrini brought Marcos into the first team in December 2009 at aged 18. He bided his time to make his full Madrid debut which was to come the same year in a 2-0 win against his dad’s hometown side, Racing de Santander. It was a special day for the Alonso family. Whilst with Madrid Marcos also gained 7 International call-ups for Spain’s U19 side. This included a 3-0 win over Estonia in Tallinn in the European Championship qualifiers. He went to the Ukraine for the European Championship Finals at U19s level.

Marcos was then brought to Bolton Wanderers in the summer of 2010 when Owen Coyle spotted his talent. His competitive debut came with a clean sheet as the Premier League side defeated Southampton 1-0 in the League Cup on 24th August. He started his first league game for Wanderers on 1st January 2011 against Liverpool, at Anfield. He has progressed on to play for Wanderers in the FA Cup were the side have reached the Semi Final at Wembley.

After Wanderers were relegated, Marcos got a new lease of life with appointment of the new Bolton gaffer Dougie Freedman. He became the first choice left-back and made 30 appearances scoring four goals, he was also voted the Bolton Evening News Player of the Season winning 37% of the vote.

With his Bolton contract running out at the end of the 2012/13 season, Marcos started a new chapter in his life when he joined Italian giants Fiorentina. The Viola fought off competition for his signature, Marcos now playing in one of Europe’s top leagues, Serie A, and European competitions in the Europa League.

After playing in all of Fiorentina’s Europa League group games, Marcos signed on loan for Sunderland in the Premier League. Alonso enjoyed a successful spell on Wearside and returned to the Viola as a main fixture in the starting eleven.

After a great 2015-16 season, Marcos began to attract the attention of the World’s very best clubs. Having completed pre-season with the Italians, starting their two opening games against Juventus & Chievo, Marcos signed for Chelsea on August 31 2016 to return to the Premier League.

Marcos made an incredible start to his Sunderland career with a Man-of-the-Match performance in a league cup victory over Manchester United. With Sunderland cut a drift at the bottom of the Premier League, Marcos’ loan moved coincided with a return to form for Poyet’s men.

It wasn’t just in the Premier League were the Black Cats’ fortunes had changed as they completed an incredible semi final victory of Manchester United in the League Cup, Marcos scoring a crucial penalty in the shoot-out. Marcos started for Sunderland in the final at Wembley Stadium, his first major cup final, where they finished runners-up to Manchester City.

In the league, Sunderland were starting to find their form with a notable a 3-0 win over Newcastle in the North-East derby, the run-in saw them pick up a point against Manchester City, and beat Chelsea at Stamford Bridge, Manchester United at Old Trafford, and Cardiff at home to secure their Premier League status.

The 25-year-old Spanish left-back became the first defender signed by Antonio Conte in a five-year contract.

Marcos has made three Spain U19 appearances and traveled to the Ukraine to play in the UEFA U19 European Championships alongside the likes of Thiago Alcântara (Barcelona), Sergio Canales (Valencia) and David De Gea (Man Utd). He featured in the qualification games in Estonia at the A. Le Coq Arena, were they beat the hosts Estonia U19 3-0 and Germany U19 1-0. Before playing France U19 in the Championship finals in Ilyichivets in the Ukraine. 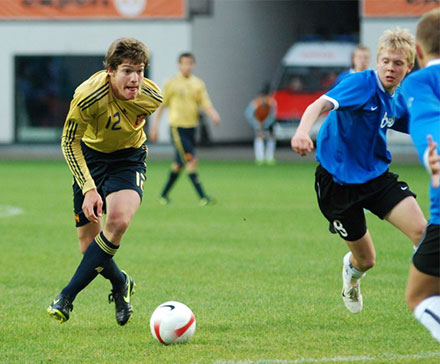